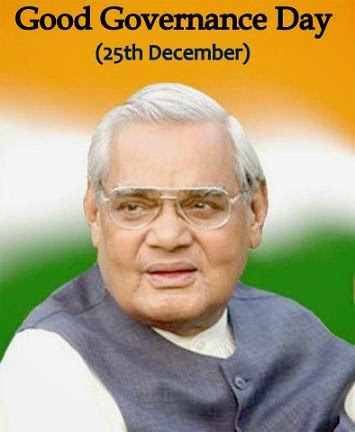 The Good Governance Day is celebrated annually on 25th December, the Birth anniversary of former Prime Minister Atal Bihari Vajpayee. The Day was established in 2014, aims to fostering awareness among the people about accountability of Government and governance.

On December 23, 2014, Mr. Vajpayee and Pandit Madan Mohan Malaviya (posthumously) were announced as recipients of the Bharat Ratna. Thereafter, the Government announced that the birth anniversary of the former Prime Minister. This day would be commemorated annually in India as good governance day.

The Good Governance Day has been declared to be a working day for the government.

Government has taken a number of initiatives on this occasion (2019).

The  Scheme also known as Atal Jal. It will promote Panchayat-led ground water management and behavioural change with primary focus in demand side management. The scheme is aimed at contributing towards the goal of doubling farmer’s incomes. Also,

The scheme is being implemented by the Ministry of Jal Shakti. It is a centrally sponsored scheme worth Rs. 6000 Cr. to be implemented over 5 years for sustainable management of groundwater with community participation. It is founded by the government of India and the World Bank on 50:50 basis.

Benefits of the Scheme:

The identified over-exploited and water-stressed areas for the implementation of the schemes  are Gujarat, Haryana, Karnataka, Madhya Pradesh, Maharashtra, Rajasthan and Uttar Pradesh. It expected to benefit nearly 8,350 gram Panchayats in 78 districts in these states. This scheme will promote panchayat-led ground water management and behavioural change with primary focus on demand side management. 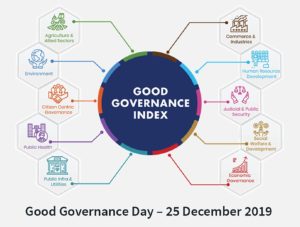 Good Governance Index has been launched by the Ministry of Personnel, Public Grievances And Pensions to determine the status of governance in the country. It assesses the impact of various interventions taken up State government and UTs.

The Good Governance Index takes into consideration the following 10 sectors: