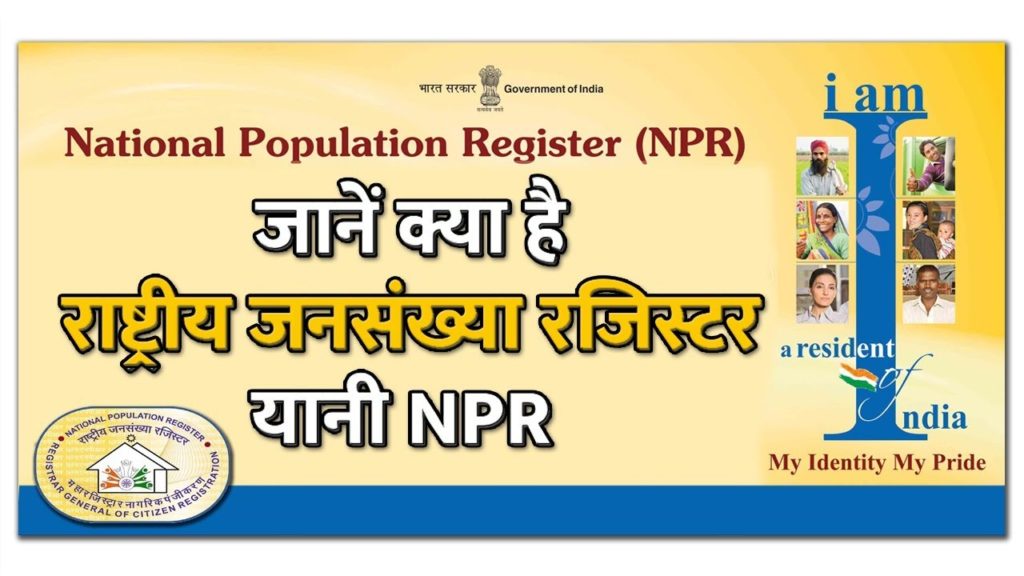 What is NPR or National Population Register?

National Population Register is a register of ‘usual resident’ of the country.

The NPR was first introduced in 2010 under the provision of the Citizenship Act, 1955 and the Citizenship (Registration of Citizens and Issue of National Identity cards) Rules, 2003.

It will be carried out under the support of the Registrar General and ex-officio Census Commissioner, India.

It is mandatory for every ‘’ usual resident of India’’ to register in this population register.

To create a complete identity database of every ‘usual resident’ in the country. The database would contain demographic as well as biometric particulars like Aadhaar, mobile number, PAN, driving license, voter ID details and Indian passport numbers. Various State governments have used NPR data to identify beneficiaries of various welfare schemes. The data would be used for schemes such as Ayushman Bharat, Pradhan Mantri Awas Yojana, Ujjawala and Saubhagya.

When NPR Will be conducted?

The data for National Population Register was collected in 2010 along with the house listings phase of the Census of India 2011. In 2015, this data was further updated by conducting a door-to-door survey. The digitization of the updated information has been completed. Now, it has been decided to update the National Population Register along with the House-listing phase of Census 2021 during April to September 2020. It would be carried out in all the states/UTs except Assam.

WHY IS ASSAM EXCLUDED?

Assam is excluded from NPR exercise. This will be carried out for all states and Union Territories. It will be carried out along with the house-listing phase of the census, except in Assam. The northeastern state has been excluded because a National Register of Citizens exercise has already been carried out there.

It will streamline data of residents across various platforms. For instance, it is common to find a different date of birth of a person on different government documents. NPR will help eliminate that.
Also, it helps the government formulate its policies better and also aid national security.
It will help to target government beneficiaries in a better way. It will also cut down the paperwork and red tape in a similar manner that Aadhaar has done.
Helpful in implementing the idea of ‘One Identity Card’ that has been recently floated by the government. ‘One Identity Card’ seeks to replace duplicate and siloed documentations of Aadhaar card, voter id card, banking card, passport, and more.

How is NPR different than NRC

According to the Citizenship Rules, notified on December 10, 2003, NPR is ‘the register containing details of persons usually residing in a village or rural area or town or ward or demarcated area within the ward in a town or urban area.’ NRC is a register containing details of Indian Citizens living in India and outside India.
NPR is not a citizenship enumeration drive; it would also include a foreigner staying in an area for more than six months. NRC will contain details of only the citizens of India excluding the foreigners staying in India.

How is NPR different than CENSUS

The decennial census is the largest single source of a variety of statistical information on different characteristics of the people of India. It includes only Indian citizens.
While NPR only contains demographic information, more details are required for census like information on demography as well as economic activity, literacy and education, and housing and household amenities. The census is the basis for reviewing the country’s progress in the past decade, monitoring the ongoing schemes of the government and plan for the future.
Census of India covers the entire population in the country while NPR also covers all the population except in the Assam.

In the previous NPR exercise (2010), the enumerators had only asked information of 15 counts, including name, date of birth, place of birth, address, relationship to head of household, sex, marital status, occupational activity, names of mother, father and spouse, nationality, educational qualification and duration of stay at current address and permanent address.
According to the National Population Register Manual, 2021, the enumerators will ask every resident to provide additional information such as date and place of birth of parents, their last place of residence, passport number, permanent account number(PAN), Aadhaar (voluntarily), voter ID card number, driving license number and mobile number.